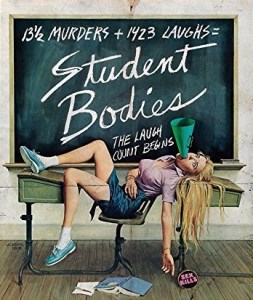 I recently purchased Student Bodies,  and had low expectations. I assumed my childhood self found it much funnier than I would at present.  I was pleasantly surprised at how well the film held up over the years, and how funny it still was.


I first saw Student Bodies when I was fairly young, probably just a few years after it’s release. It had an “R” rating, so I’m sure it is one I had to sneak in when my parents were out of the house. Back then, I thought the movie was very funny, although I’ll admit, several of the jokes were over my head at the time.  After seeing this movie again for the first time in over thirty years, I feel it endured the decades fairly well!

Student Bodies holds a special place in history, being the first modern horror spoof, and was quick to cash-in on America’s newfound fascination with slasher films.  Film-makers in the late 70’s and early 80’s were birthing the modern horror genre.  The particular success of John Carpenter’s 1978 classic, Halloween, ignited a craze that brought horror movies in to the mainstream, and Friday the 13th brought in huge profits the year prior.  Unlike  modern horror spoofs such as the  Scary Movie franchise, where the movies themselves are being parodied,  Student Bodies takes aim at the conventions and plot devices used in many horror films.  Having said that, Student Bodies does make a few direct references to Halloween and Friday the 13th in the opening sequence. 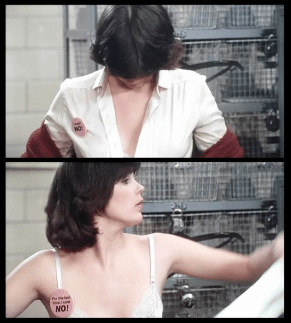 The plot in Student Bodies is fairly straightforward:  Whenever the students at Lamab High School have sex, they get killed by a heavily panting character known as “The Breather”.  This follows the “no fun”convention seen in many horror moves. That is to say, a character that has sex, drinks or does drugs, will likely not survive the movie.

The film’s lead is a prudish, female student named Toby (Kristen Riter). Toby seems to consistently be in the the wrong place at the wrong time, and finds herself the primary suspect in the murders of her fellow students.  To the viewer, it seems obvious that the real murderer is, in fact, one of the assorted lunatics employed by the school.  The bulk of the movie revolves around the continual murder of the students while Toby searches for clues and tries to clear her name.

The jokes and gags in Student Bodies are frequently low-brow, and some fall a little flat.  Overall, I still found it quite funny. Despite the “R” rating,  nudity and gore are minimal.  There is a funny scene in which a man addresses the audience, and secures the rating for the film.  Another element of parody seen frequently in Student Bodies is the expositional notations on-screen, illustrating obvious points in the movie such as suspects, clues and even a running body count.

I think fans of horror will appreciate the swipes that Student Bodies takes at the genre.  It’s a fun movie to watch in a group, and one that I will revisit often.