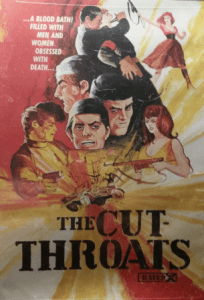 The Cut-Throats is an exploitation film for sure. It’s not quite an action movie, not quite nazisploitation.  I suppose you could generalize, and call it sexploitation, but even then, it seems a stretch.  (Potential spoilers ahead!)

The Cut-Throats is pretty trashy, yet oddly difficult to pin to a particular genre.  A lot of trash cinema of the late 60’s through the early 80’s involving Nazis  and WWII, falls in to what people call “Nazisploitation”.  Most of those films follow a similar formula – essentially taking the model for Women In Prison movies then substituting Nazis for the warden and prison staff. The Cut-Throats entirely avoids those plot lines, yet still offers up a sleazy mix of violence, girls and Nazis.

I will add that the print I viewed for this review was the recently restored Vinegar Syndrome  limited edition. To my knowledge, this edition of 1500 copies is the only DVD release of this movie. From the standpoint of the restoration it looks, as anyone familiar with Vinegar Syndrome might guess,  fantastic.   The “X” rating on this is a little surprising.  Of course, in 1969, there is no explicit sex, but I’ve seen several movies from this period with more gratuitous nudity, and sexual situations that managed to earn an “R” rating.  If this movie was remade shot-for-shot today, it would certainly garner an “R” rating.

Our story opens with private Jimmy Johnson (John Kieth) and Sgt. Joseph Tackney (Jay Scott) sort of slacking off and talking about home.  The viewers discomfort starts as an abrupt cut to a scene that shows a German woman walking with a handful of possessions, and ultimately encounters a sort of rapey Geman soldier (Michael Pataki) wearing an SS uniform. She offers him a painting for five marks. Instead, he eats her food then has his way with her.  While not exactly forced, it certainly wasn’t welcomed by the woman.

Soon after, our two GIs encounter the German, and a gunfight ensues. Both Pvt. Johnson, and the unnamed German soldier are shot and killed. This moves us forward to the primary plot… A group of soldiers known as the “Cut-Throats” meet up with the hard-nosed Captain Kohler. The late Pvt. Johnson and Sgt. Joseph Tackney  from the opening sequence are members of this elite squad.

Upset that he is a man short, the Sargent tells his men that they were hand-picked for a special mission to retrieve important documents from a German occupied country club and a Nazi General (William Guhl).   Our heroes stealthily infiltrate the country club, taking out the perimeter guards using various silent tactics.  After they’ve cleared out the German soldiers, they discover a group of German women.  This “country club” is essentially a brothel that houses prostitutes sympathetic to the German cause.  I also might add that the buildings in the compound appear to be derelict apartment complexes from a failed California suburbanization development.  The rather desert-like landscape also does little to sell the viewer on the narrative that this is all taking place in Germany.

The GI’s get comfy with the fräuleins, who treat them to food, drink,  and a clumsy, un-choreographed dance number.  Eventually they all break out for a little alone time with each other.  At this point it becomes apparent that the actual motive for the raid on the camp is so the Captain can pilfer a stash of Nazi jewels.  It also becomes apparent that the motive of the film-makers was to get a bunch of women to take their clothes off.

The film tries to do many things, and does few of them well. There are points where the viewer witnesses the brutality of war in effort to provide context to the film’s characters, but it’s a shallow effort at best.  If you are a WWII buff, or even someone that generally requires some level of authenticity in a movie, this one will drive you nuts!  An example would be the the three vehicles that the Nazis use.  The staff car is fairly correct, but then you have a Kübelwagen with markings from the German North African campaign, and an ambulance… a DODGE ambulance.  The weapons of the US soldiers are a little odd too.  Sure, there are some correct M1 Garand rifles, and an M1 Carbine, but there are also the single action revolvers worn in a cowboy rig by Capt. Kohler, and well as the side-by-side “coach gun” used by another squad member.  The latter being , in my opinion, an incredibly poor choice for a primary combat weapon.  But I digress… Frankly, if I were to document every flaw in this movie, it would exceed the length of it’s script ten-fold.  Finally, the films theme song, “The Ballad of Jimmy Johnson” is just awful.  It’s got that slow,  cheesy, western ballad sound to it that is completely out of place here.

The most positive thing I can say about this movie is that it has a lot of nudity.  For those that enjoy cinematic trash as I do, that may be enough.  There is a rather awesome scene with an uncredited Uschi Digard that aids the watchability  of the film immensely.

The bottom line: A truly bad movie with just enough going on to be kind of entertaining. 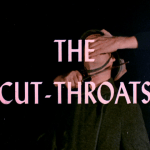 Not to be super obvious here.. (from the trailer) 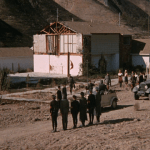 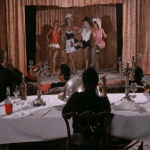 A beat off… or two

A quick note from The Fanatic
Student Bodies (1981)