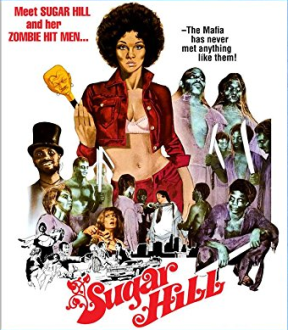 Sugar Hill manages to cross many genres successfully.  This polyester clad film blurs the lines between zombie horror, revenge and blaxploitation with a few comical moments to boot. (Potential spoilers ahead!)

While a little more of a mainstream feature, the Louisiana set Sugar Hill manages to firmly land in the upper tier of trash cinema. The story revolves around Diana “Sugar” Hill (Marki Bey) whose fiance, Langston (Larry D. Johnson) gets beaten to death by some thugs for not selling his bar, Club Haiti, to their boss, Mr. Morgan (Robert Quarry). Diana contacts voodoo priestess, Mama Maitresse (Zara Cully) to help her exact revenge on the criminals that killed Langston. Mama Maitresse conjurs up a voodoo god named Baron Samedi (pronounced Szahm-dee) played by Don Pedro Colley.

At this point, the plot is pretty predictable. Samedi raises an army of the dead from a long forgotten slave graveyard in the bayou to aid Sugar in her quest for vengeance . The interesting point about this is that the zombies are really a mix of classic voodoo zombies from early horror movies and the more modern, Romero-esque creatures. The special effects in Sugar Hill are very basic – Essentially fog machines and body paint. The zombies have silver orbs for eyes. This one little detail makes the movie immeasurably more watchable, as it really accents a separation from the living, and helps you to believe these are really the undead. Had it just been some dark makeup around the eyes, the whole movie would have seemed a lot more flat.

While there isn’t any notable nudity or sex, Marki Bey manages to keep us entertained by looking absolutely stunning throughout the movie.  She’s also one tough chick, and certainly not someone to mess with…lest you get eaten alive by hungry pigs.  I think my favorite character was  actually Baron Samedi.  I loved the way he blended in to the environment, posing as everything from a bartender to a groundskeeper.  Be on the lookout for the Blu-ray scheduled for a summer 2015 release… I know I will!

Bottom Line: Fun from start to finish – a worthy addition to any collection!