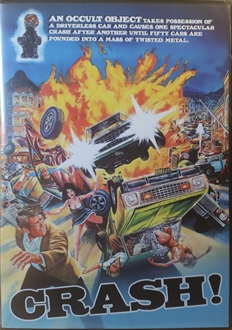 Crash! is a good example of the vehicular mayhem movies that were popular in the 1970’s-80’s.  While many people have likened it to Stephen King’s Christine, I feel it is a very different movie.  (Potential spoilers ahead!)

Crash! involves a driverless car that is under control of a malicious god called Akasa that is channeled through an idol that is purchased at a swap meet by the movie’s lead character, Kim Denne (Sue Lyon).  It is established fairly early in the movie that Kim and her wheelchair bound husband, Marc (José Ferrer) have an acrimonious relationship.  Marc blames Kim for his infirmity and is suspicious about the time she spends outside the home.  Deciding that he has had enough of her, he somehow has the family dog attack her and cause a car accident.  Marc initially beleives she is dead, but she survives the attack and subsequent crash and ends up in the hospital with (wait for it) ….. amnesia.   As the doctors and police try to get to the bottom of her accident,  in part by attempting to learn about the idol she has in her possession, the main plotline is interjected  by sequences of a seemingly autonomous black Camaro causing all sorts of fiery and fatal mayhem.  During her recovery, Marc continues to attempt to murder Kim.

Overall, I really enjoyed this early Charles Band flick. While there were plenty of gasoline soaked explosions, the perceived violence of the movie was somewhat subdued. The story and acting were both fairly solid and the car sequences were entertaining. While Crash! leans more towards an action/suspence movie than it does toward horror, the visual presentation of Kim while she is “possessed” by Akasa was very creepy.

The bottom line: Crash! is a fun ride! 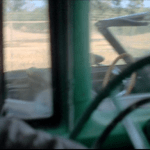 Another faceless asshole on the internet… 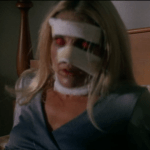